‘Who will believe my verse in time to come’ is number seventeen of 154 sonnets that Shakespeare penned. It is one of the 126 poems that are part of the Fair Youth sequence. The series is dedicated to a specific person, a young, unknown man who Shakespeare cared for. This sonnet is the last of seventeen that focused on procreation. Throughout the previous sixteen sonnets, the speaker chastises the Fair Youth for not getting married and having children. He believes this is the only true way for him to maintain his youth and beauty.

Explore Sonnet 17: Who will believe my verse in time to come

Summary of Who will believe my verse in time to come

‘Who will believe my verse in time to come’ by William Shakespeare is the last of the procreation sonnets in the Fair Youth sequence.

In this poem, the speaker makes a plea for the youth to realize that the speaker’s writing can only go so far. He might do his best and capture the youth accurately but no one in the future is going to believe him. They’ll dismiss his words as the ravings of a madman. No one, the future men and women will think, could have such divine features. It is because of this certainty that the speaker knows that having a child is the only real option for the youth.

Structure of Who will believe my verse in time to come

‘Who will believe my verse in time to come’ by William Shakespeare is a fourteen-line sonnet that is structured in the “Shakespearean” or English form. It made up of three quatrains, or sets of four lines, and one concluding couplet, or set of two rhyming lines. The poem follows a consistent rhyme scheme that conforms to the pattern of ABAB CDCD EFEF GG and it is written in iambic pentameter. This means that each line contains five sets of two beats, known as metrical feet. The first is unstressed and the second stressed. It sounds something like da-DUM, da-DUM.

The last two lines of ‘Who will believe my verse in time to come’ are a rhyming pair, known as a couplet. They often bring with them a turn or volta in the poem. They’re sometimes used to answer a question posed in the previous twelve lines, shift the perspective, or even change speakers. In the case of this particular poem the couplet

Shakespeare makes use of several poetic techniques in ‘Who will believe my verse in time to come’.These include, but are not limited to, examples of alliteration, enjambment, metaphors, and similes. A simile is a comparison between two unlike things that uses the words “like” or “as”. A poet uses this kind of figurative language to say that one thing is similar to another, not like metaphor, that it “is” another. There is a good example in the third quatrain where the speaker compares his poems to the ravings of old men. He sees his works being interpreted this way in the future.

There are also examples of metaphors in this poem, such as in the first quatrain. In this part of the poem Shakespeare refers to the youth’s beauty as his “high deserts” and to his own poems as “a tomb”.

Alliteration occurs when words are used in succession, or at least appear close together, and begin with the same sound. For example, “touches” and “touched” in line four and “rights” and “rage” in line eleven. Enjambment occurs when a line is cut off before its natural stopping point. Enjambment forces a reader down to the next line, and the next, quickly. One has to move forward in order to comfortably resolve a phrase or sentence. For example, the transition between lines one and two as well as that between lines three and four.

Analysis of Who will believe my verse in time to come

Who will believe my verse in time to come

If it were filled with your most high deserts?

Though yet heav’n knows it is but as a tomb

Which hides your life and shows not half your parts.

In the first quatrain of ‘Who will believe my verse in time to come’ the speaker begins by asking the Fair Youth what he’s supposed to do about the crossroads they’ve found themselves at. The youth won’t have children and that leaves the speaker with only one choice, try to immortalize the young man in writing. But, the speaker knows that this is impossible. No one in the future (“in time to come”) will believe his praise. It will fall on deaf, unbelieving ears.

Rather than a monument to his beauty, the poetry will become a tomb in which it goes to die. No one will believe his words of praise. “Not half” the youth’s “parts,” or aspects of his true nature will show through.

If I could write the beauty of your eyes

And in fresh numbers number all your graces,

The age to come would say, “This poet lies—

Even if the poet was able to write about the youth clearly and accurately everyone in the future will thing “This poet lies”. There is no possible way, they’ll think, that this face or this person could’ve existed. They were too divine to be real.

So should my papers, yellowed with their age,

Be scorned, like old men of less truth than tongue,

And your true rights be termed a poet’s rage

In the last quatrain of Sonnet 17, the speaker acknowledges the truth of his own writing. It is all purposeless. His poems (papers) would age with time until they were worthless. Shakespeare uses a simile in the tenth line to compare the aged papers to old men who always talk but never have anything true to say.

The truth of the Fair Youth’s beauty would be lost to the ages, written off as the madness of a poet. The “meter” of an “ántique song” is all these descriptions would turn into. No one would read them and believe them.

But were some child of yours alive that time,

You should live twice: in it and in my rhyme.

It is because of all the factors that the speaker lists out in the first twelve lines that the Fair Youth needs to have children. If there was a “child of yours alive” in the future then things would be different. The Fair Youth would live again, in the child and in the “rhyme” or poem. 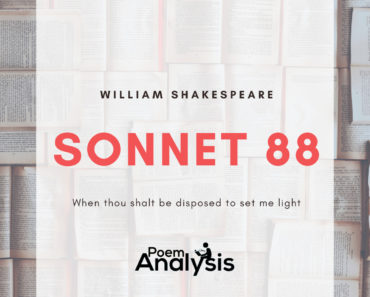