A second analysis: Composed upon Westminster Bridge is one of the most famous sonnets of William Wordsworth. This sonnet, a poem of fourteen lines, was composed between July 31 and September 3, 1807, and was first published in Poems in Two Volumes in 1807. Composed upon Westminster Bridge…  portrays the quiet, the calm, and the silence which prevailed, when Wordsworth crossed Westminster Bridge with his sister Dorothy while travelling in a boat from London to Calaise on July 31, 1802. Dorothy Wordsworth, in her Journal has described this scene thus: “The City, St. Paul’s with the river and a multitude of little boats made a most beautiful sight. The house was not overhung by their cloud of smoke, and they were spread out endlessly, yet the sun shone so brightly, with such a fierce light, that there was even something like the purity of one of nature’s own grand spectacle.”

This sonnet, Italian or Spenserean in structure, divisible into an octave (first eight lines) and a sestet (last six lines) is a study in contrast between the noisy day and calm morning. The feeling of peace and calm experienced by the poet is communicated to the readers’ heart also. The last line fully brings before us the contrast between the noisy and hurried activities and processes that go on during the day in the great city and the calm and quiet which prevails a dawn: “And all that might heart is lying still.”

Earth has not anything to show more fair:

Dull would he be of soul who could pass by

A sight so touching in its majesty:

The beauty of the morning; silent, bare,

Open unto the fields, and to the sky;

All bright and glittering in the smokeless air.

The poet starts his poem by saying that the scene of the city from Westminster Bridge is so beautiful that there cannot be anything more beautiful than this scene on this earth. A man who can pass by this beautiful scene without being affected by it would be very dull. The sight is full of grandeur and appeals greatly to the heart. It seems that the city of London is wearing a white dress of light of the morning. The city is without the noise of the day, silent and peaceful, and open up to the sky. The poet says that in in the river there are ships and on the bank there are towers, theatres and temples or churches lying silent and glittering in the smokeless morning air.

In his first splendour, valley, rock, or hill;

Ne’er saw I, never felt, a calm so deep!

The river glideth at his own sweet will:

And all that mighty heart is lying still!

In the sestet (last six lines) of his sonnet, Wordsworth speaks of glorious beauty of the sunshine of the morning. He expresses the view that the sun was never seen in the grandeur of the beauty of sunshine in any valley, on any rock or hill, as it is shining on this morning.

The poet says that he neither saw nor felt such deep calm ever before. The river (Thames) flows majestically in its own course, at its own chosen path. The poet feels grateful to God for the quiet scene in which even the house appears so still as if they are sleeping. It seems that the heart of the big city has stopped beating to see the beauty of the calm and quiet of the Natural objects. This calm and quiet beauty of morning has been placed as a contrast to the commercial character of the city of London during day when there is great noise bustle.

The beauty of the morning; silent, bare,

Open unto the fields, and to the sky;

Looking at the beauty of London city in the early morning, the poet is quite mesmerized by it. It seems that the city is wearing a garment of beauty. The tall building of the city, its towers, domes, theatres and temples as well as the big ships anchored at its harbour lie upon in the smokeless air of the early morning. They look bright and glittering.

Ne’er saw I, never felt, a calm so deep!

The river glideth at his own sweet will:

And all that mighty heart is lying still!

These are the concluding lines of Composed upon Westminster Bridge… . What has struck the poet most about the sight of London city early in the morning is the calm that has enveloped it. The entire city seems to be sleeping. It has not stirred as yet. Once it does so it would start throbbing with activities. But at the moment this mighty heart of England is still.

Life and Works of William Wordsworth

William Wordsworth, the poet and prophet of Nature, was born in 1770 in Cockermouth, Cumberland in the beautiful Lake country of Northern England. He received his education at the grammar school at Hawkshead and at St. John ‘s College, Cambridge. After taking a degree at Cambridge University, he went on a walking tour in France, the Alps and Italy in 1790. He returned to France the next year and spent there some time. The revolutionary movement in France exercised a strong influence on him.

While in France, he fell in love with Annette Vallon, daughter of a surgeon. She bore him a daughter named Caroline. After the execution of Louis XVI and the reign of terror, Wordsworth felt disillusioned. He returned to England in 1793. In this year, he published “An Evening Walk” and Descriptive Sketches. In 1795, he met Coleridge at Recedown. Two years later, in 1797, Wordsworth and Coleridge moved to Somersetshire. In 1798, they jointly published Lyrial Ballads – a book containing 23 poems, which revolutionized the English poetic diction. Wordsworth contributed to it 19 poems, Coleridge contributed his famous poem, “The Rime of Ancient Mariner“, split into seven analysis on Poem Analysis:

At the end of this year (1798), Wordsworth, Dorothy (Wordsworth’s sister) and Coleridge went to Germany. Here Wordsworth began an autobiographical poem named “The Recluse”. He also wrote “Ruth”, “Lucy Gray” and “Lines on Lucy.”

In 1799, Wordsworth settled permanently in Lake County – first at Dove Cottage Grasmere, and then at Rydal Mount. Here he spent the remainder of his life. In 1803, he published the second edition of Lyrical Ballads with a critical essay entitled “Observations” (expounding Wordsworth’s theory of poetry). In this year, he also penned down “Michael”, a pastoral poem. He married Mary Hutchinson in 1802. Three years later he completed the “Prelude”. In 1807, he published poems including “Intimations of Immortality” and Sonnets. His “The Excursion” appeared in 1814. He was appointed as Poet Laureate in Succession to Robert Southey in 1843. He died in 1850, at the age of eighty.

Composed upon Westminster Bridge is one of the most anthologized poems of Wordsworth. What makes this poem unique among the Nature poems of Wordsworth is the fact that it does not describe any natural scene like the hill of the river or meadow. Rather, it describes a city-perhaps one of the few big cities in the world at that time –London. The poem picturizes the quiet, the calm, and the silence which prevailed, when Wordsworth crossed Westminster Bridge with his sister Dorothy while travelling in a boat from London to Calaise on July 31, 1802.

Previous 1 2
What's your thoughts? Join the conversation by commenting
We make sure to reply to every comment submitted, so feel free to join the community and let us know by commenting below. 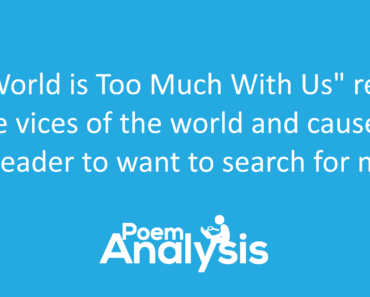 Elise has been analysing poetry as part of the Poem Analysis team for neary 2 years, continually providing a great insight and understanding into poetry from the past and present.