My Heart Leaps Up by William Wordsworth

On the surface, William Wordsworth’s ‘My Heart Leaps Up’ is about the simple beauty of a rainbow. Looking at it more closely, the poet is saying people should maintain their sense of childlike wonder well into adulthood and old age. 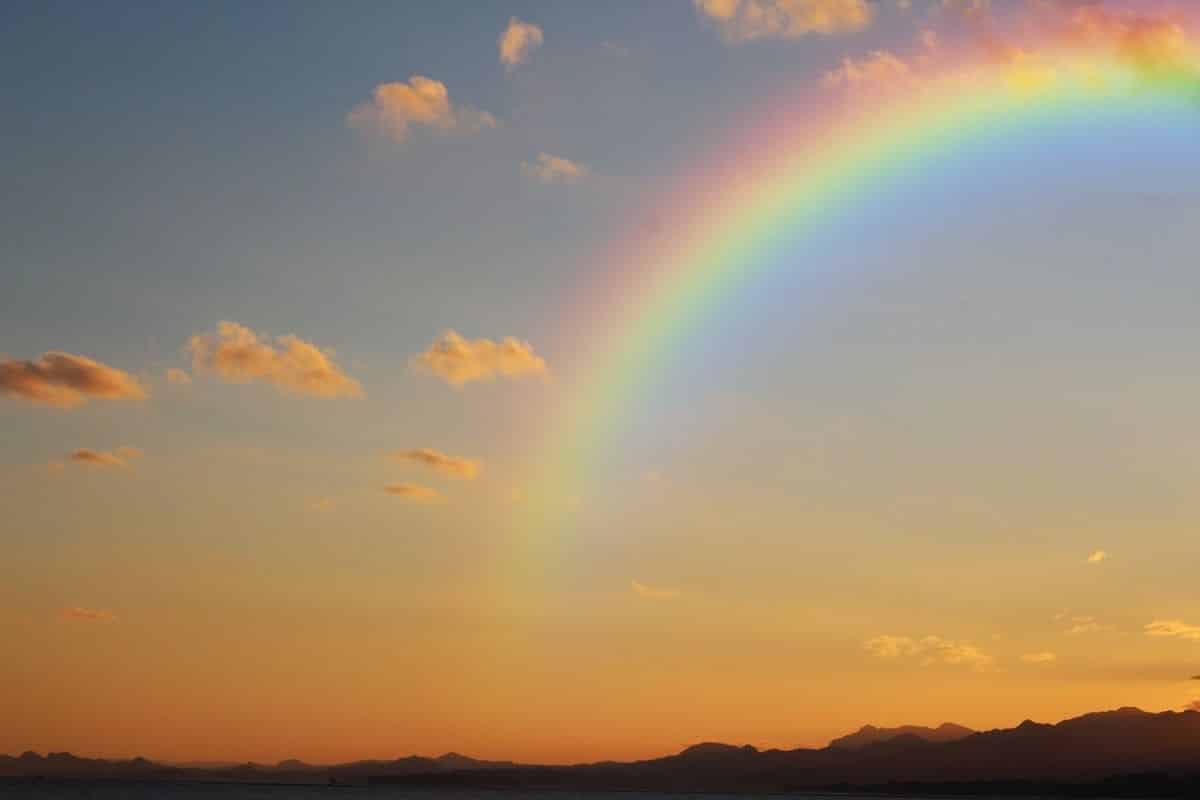 The poet of ‘My Heart Leaps Up,’ William Wordsworth advocated for poets to move away from the use of dense and archaic language, which had been popular up until that point in history. Instead, he believed that poetry could and should be written in the everyday language of the average man. This idea is clearly displayed in this poem. Compared to other Wordsworth poems, the vocabulary and meaning of this piece are relatively easy to grasp.

Explore My Heart Leaps Up

‘My Heart Leaps Up’ by William Wordsworth centers on a rainbow, a symbol of nature and how the poet wishes to keep his childlike self alive.

This poem begins with a reference to a rainbow. Whenever Wordsworth beholds it, his heart gets filled with enthusiasm and energy. It is not that the sensation of joy existed in his heart when he was a child. As an adult, he still enjoys the beauty of a rainbow. He wishes to retain this childish self even if he matures and grows old. If it does not happen, he will embrace death unquestionably. According to him, nature, symbolized by the rainbow, will always be divine, and he thinks it should be for everyone.

This poem consists of the following themes: nature, childhood, beauty, and aging. The main theme of this piece like most of his poems is nature and the beauty in it. For him, nature is a true embodiment of God. A glimpse of the rainbow is like having glimpses of the divine entity. The rainbow is nothing other than a bridge that connects poets to the spiritual self. He wishes never to lose touch with nature even if he grows old. The theme of childhood is another important aspect of this piece. This theme is present in the third and seventh lines. Besides, the theme of aging is displayed in the fifth line.

The poem’s simplicity carries over into its use of rhyme scheme. There are a total of nine lines in this piece. Each line ends with one of 4 sounds, each sound is repeated twice, except “man,” which ends two lines and is rhymed with “began.” The rhyme scheme of this piece can be sketched as ABCCABCDD. Regarding the meter, the poem is written in iambic tetrameter. There are three variations: the second line is in iambic trimeter, the sixth line contains two iambs, and the last line is in iambic pentameter.

Wordsworth’s ‘My Heart Leaps Up’ contains the following literary devices that make the poetic thoughts more appealing to readers.

My heart leaps up when I behold

A rainbow in the sky:

In the first lines of the poem, Wordsworth explains his reaction to a rainbow. It’s obvious that the poet has a deep affinity for the natural world. He says, “My heart leaps up…” This is an extreme reaction to a not uncommon meteorological event.

Rainbows are, universally, regarded as beautiful, but the rainbow in this poem is a symbol of nature as a whole. Wordsworth’s reaction is somewhat extreme. Most grown men do not react with the same level of enthusiasm to a rainbow. As the poem goes on, however, he will argue that we should all share his sense of wonder.

So was it when my life began;

In these lines, the poet describes that he has always felt the same visceral, joyous reaction to a rainbow and to nature as a whole. His sense of wonder began when he was born and persisted throughout his childhood, into his adulthood. Wordsworth has been a fan of nature from the very start.

Both lines begin similarly with the word “So”. This device (anaphora) is used to emphasize his idea. It also helps readers to understand that the meaning of these lines is internally connected.

So be it when I shall grow old,

Or let me die!

Wordsworth gets a bit extreme in these lines. First, he states that he hopes to continue to be mesmerized by nature well into old age. Then, he says “Or let me die!” The fairly unambiguous interpretation here is that the poet would rather die than find the world around him boring and bereft of beauty. Death would be preferable to becoming a jaded cynic who cannot grasp the wonder of nature.

The Child is father of the Man;

This is, perhaps, the most important line of ‘My Heart Leaps Up’. In his typical fashion, Wordsworth gives a seemingly straightforward metaphor, which actually has enormous implications.

All people were once children, so the line makes some sense on that level. We come from children as children come from their parents. The greater implication is that, as a parent, a child can be a great teacher and a great role model.

Children are constantly experiencing the world as if for the first time. They have an unending sense of wonder and awe regarding nature and, indeed, life itself.

Wordsworth is saying we should be like children in this way and that we should hold on to our childhood sense of the world.

And I could wish my days to be

Bound each to each by natural piety.

In the last two lines of the poem, Wordsworth closes by reiterating the idea that he hopes to continue being in awe of nature. He wants every day to be tied together by an ongoing theme of love for the world. The words “natural piety” imply that the poet considered his feeling for nature to be so reverent that seeing a rainbow was an almost spiritual experience.

William Wordsworth was part of the Romantic Movement. The artists of this time elevated nature, discussing it as a part of the “sublime,” or something of great beauty beyond human understanding. This respect and reverence for nature are on clear display in this particular piece.

The poem was written on March 26, 1802, while Wordsworth was staying at Dove Cottage with his wife. This was a fertile place for the poet, as he wrote many poems there. Indeed, ‘My Heart Leaps Up’ was written at around the same time as many of the poet’s other works such as ‘To The Cuckoo,’ ‘Ode: Intimations of Immortality,’ etc. The poem was first published in 1807 as part of “Poems, in Two Volumes”. Explore more Wordsworth poems.

What is the meaning of ‘My Heart Leaps Up’ by William Wordsworth?

The overall meaning of this poem is that Wordsworth wants to keep his childish self alive and tries to feel the impulses of nature as he felt as a child.

What type of poem is ‘My Heart Leaps Up’?

It is a short, romantic lyric poem with a regular meter and rhyme scheme. This poem is written from the first-person point of view.

What does the rainbow symbolize?

The “rainbow” is a symbol of nature. It is depicted as a bridge that connects Wordsworth’s spiritual self to the divine.

What is the mood of the poem?

The mood of this poem is joyous and filled with childish enthusiasm.

What does “natural piety” mean?

The phrase “natural piety” contains a geometrical pun. It symbolizes continuity and infinity. The word “piety” normally means reverence. This phrase refers to the inherent purity of a human being.

Here is a list of some poems that similarly deal with the themes present in William Wordsworth’s lyric ‘My Heart Leaps Up’.

You can also read about these beautiful poems on rainbows and the best-known nature poems.