William Wordsworth, much beloved poet, had a way of giving hope and life with his words. His poems can cause the reader to rise above the earthly situations and think about the spiritual realm and the human soul. This particular poem, The World is Too Much With Us, reveals the vices of the world and causes the reader to want to search for more, to stop and enjoy the beauties of nature, and to take the time to think. The speaker begins,

The World is Too Much With Us Analysis

The world is too much with us: late and soon,
Getting and spending, we lay waste our powers

The speaker begins The World is Too Much With Us with the term “the world” and the reader quickly begins to understand what that term means in this context. He is talking about the worldly cares and concerns such as money, possessions, and power. And he concludes that it is “too much with us” meaning that we care far too much about these worldly things. He gives more depth of thought to this idea when he suggests that by using our time, minds, and energy in “getting and spending” that we “lay waste our powers”. In other words, people have powers beyond that which they have tapped into, because they are so busy getting and spending. They are tied up in their greed for more money and their time is accounted for by their actions of getting money, spending money, and caring for their possessions. He believes that money and worldly possessions are far more important to people than they should be. He continues,

Little we see in Nature that is ours;
We have given our hearts away, a sordid boon!

In these lines, the speaker contrasts Nature with “The World”. He reveals that while people spend their time in acquiring worldly possessions, the true beauty of the earth cannot be owned. He reveals that very few things that people see in Nature actually belong to them. He then laments, “We have given our hearts away”. He believes that where we should enjoy nature, though it is not ours to own, instead we are filled with greed and we acquire wealth and worldly possessions rather than enjoying nature. The speaker then continues by describing the beauties of nature that people are missing out on by being so caught up in the want for money and possessions.

This Sea that bares her bosom to the moon;
The winds that will be howling at all hours,
And are up-gathered now like sleeping flowers;

In these lines of The World is Too Much With Us, the speaker describes the beauties of nature that most people are missing out on. He describes the sea, and the wind, and the flowers. His description of these parts of nature use personification to help the reader to connect with each description. The sea “bares her bosom to the moon” which suggests an intimacy between the moon and the sea. The winds “howl”. This gives the wind human emotion. The flowers “sleep”. Giving these parts of nature human attributes helps the reader to feel this connection with nature. It paints a picture of nature and allows the reader to understand what he is missing out on by being caught up in worldly possessions and greed.

For this, for everything, we are out of tune;
It moves us not. — Great God! I’d rather be
A Pagan suckled in a creed outworn;

These lines are the speakers final exclamation that “we are out of tune” with nature because we are so caught up in worldly wealth. Here, the speaker swears an oath that he would rather be a poor pagan than be so distracted by worldly wealth so as to render himself unable to enjoy the true beauties of life. He appeals to God, and even exclaims that he would rather be a pagan than to be out of touch with nature.

So might I, standing on this pleasant lea,
Have glimpses that would make me less forlorn;
Have sight of Proteus rising from the sea;
Or hear old Triton blow his wreathèd horn.

In these final lines, the speaker reveals that if he were a poor pagan, he would have “glimpses” of nature that would give him joy and hope, or at least make him feel “less forlorn”. He would rather be poor and helpless and connected with nature than rich and powerful and alienated from it.
In the final two lines, he refers to two pagan gods. Proteus was thought to be able to tell the future, though he avoided doing so if he could. The speaker implies that had he been a pagan, perhaps he could imagine being in touch with Proteus, or at least catching a glimpse of him as he stares out across the sea. Triton was the pagan god that was said to be able to calm the waves of the sea. This implies that the speaker looks out at the sea, enjoying nature, long enough to see Triton and Proteus. The speaker refers to these two pagan gods after he first appeals to God and swears that he would rather be a pagan than alienated from nature. 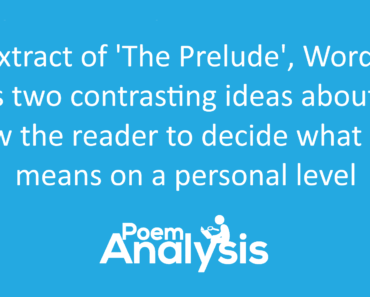