The first person narrative perspective is a literary style in which the narrator tells a story about him or herself.

The writer might be the source of this perceptive, as in memoirs or autobiographies and some poems. On the other hand, the speaker might be a character the author created or a persona channeling for a specific poem. This is one of the most popular narrative perspectives in prose and verse. 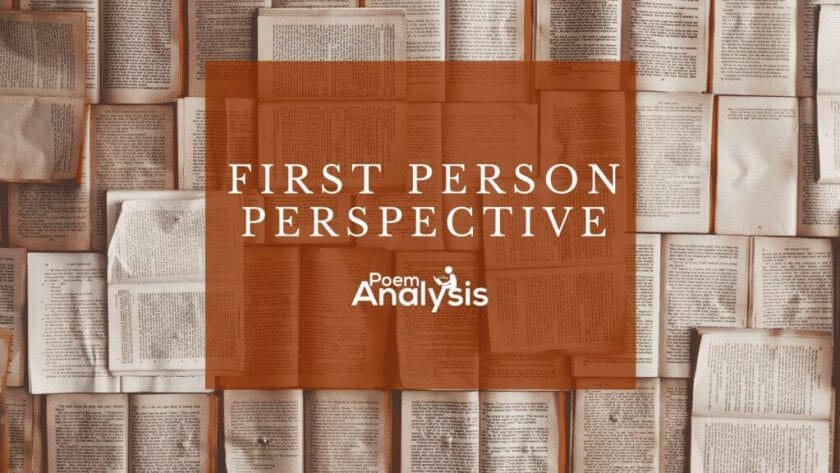 Definition and Explanation of First Person

The first person narrative perspective involves using first-person pronouns and a personal account of events throughout a story, novel, or poem. The first person singular pronouns are “I,” “me,” “my,” and the plural is “our” and “we.” When writers use this specific narrative perspective, they do not have to tell the story from one person’s emotional perspective. It is possible to flip between using this perspective and third and second person, especially if one is writing is novel or longer story.

Why Do Writers Use First Person Perspective?

When writers use this perspective, they’re able to craft a personal narrative. This narrative might be from their own perspective or the perspective of a character or persona that they’ve created for a particular poem or story. This perspective allows readers access to a  character’s innermost thoughts and focuses on, almost entirely, on what they think and what they’re doing. This is especially effective if the main character is going through something emotionally stressful or experiencing events that readers find engaging. If a writer chooses not to use this perspective, they have to employ other techniques in order to convey their characters’ emotions to the reader.

Example #1 The Colossus by Sylvia Plath

Confessional poetry is one of the best sources of the first person perceptive in verse. These poems, for which Sylvia Plath and Anne Sexton are best-known for, are deeply moving and personal. This genre pioneered and normalized the act of confessing the poet’s own emotions through the text. More often than not, the “I” that Sexton or Plath uses in their work refers to the poet’s perspective. Take a look at these lines from the first stanza of Plath’s ‘The Colossus’:

I shall never get you put together entirely,

Proceed from your great lips.

It’s worse than a barnyard.

This poem is one of Plath’s best-loved. It addresses her relationship with her father, who passed away when she was young. In it, readers can find a contrast between Plath’s difficult relationship with this man and her love for him. He’s never coming back, the speaker realizes, but still, she labors in his shadow, trying to put him back together.

Example #2 The Truth the Dead Know by Anne Sexton

This poem is another wonderful example of how the first-person literary perceptive can help a reader understand what a speaker, and in this case, the poet, is going through. This poem was written soon after the deaths of Sexton’s mother and father in 1959. It describes the poet’s own emotions in reaction to her parents’ death and the actions she chose to take afterward. Here are a few lines from the text:

Gone, I say and walk from church,

refusing the stiff procession to the grave,

letting the dead ride alone in the hearse.

It is June. I am tired of being brave.

Here, Sexton describes what she did and how she felt after attending a funeral. She has reached a breaking point in her experience and is ready, in one way or another, to rid herself of these feelings.

Example #3 What My Lips Have Kissed, and Where and Why by Edna St. Vincent Millay

Millay could also, in some instances, be categorized as a confessional poet. Much of her work is deeply emotional and lyrical. In this particular poem, the speaker tries and fails to recall the lovers she had in the past. The only thing she can remember is the happiness she experienced with them. Here are the first lines of the poem:

What lips my lips have kissed, and where, and why,

I have forgotten, and what arms have lain

Under my head till morning; but the rain

Is full of ghosts tonight, that tap and sigh

Upon the glass and listen for reply,

These beautiful lines evocatively depict the emotional state the speaker is existing in. They are skillfully crafted in a way that allows the reader to feel something of what the speaker is recalling.

Example #1 To Kill a Mockingbird by Harper Lee

One of the best-known first-person novels is To Kill a Mockingbird by Harper Lee. This novel was published in 1960 and became an instant success due to its intense plot line and relatable characters. The story deals with issues of rape and racial discrimination, and inequality in a way that few other books attempted up until that point. The novel is written in the first person narrative perceptive, told from Scout Finch, the daughter of Atticus Finch. Here are a few lines from the novel demonstrating this literary perspective:

I never understood her preoccupation with heredity. Somewhere, I had received the impression that Fine Folks were people who did the best they could with the sense they had, but Aunt Alexandra was of the opinion, obliquely expressed, that the longer a family had been squatting on one patch of land the finer it was.

In this passage, Scout is considering her Aunt’s perspective on heredity, a perspective that she doesn’t share. It is one of the many ways that people are categorized and ranked throughout the novel.

Jane Eyre is, without a doubt, Brontë’s most famous work. It was originally published in three parts in October 1847. It is considered a Bildungsroman, or a coming of age story. It is told from Jane’s first-person perspective, whose struggles and emotions are made quite clear for the reader. Here are a few lines from the novel:

I am glad you are no relation of mine. I will never call you aunt again as long as I live. I will never come to visit you when I am grown up; and if any one asks me how I liked you, and how you treated me, I will say the very thought of you makes me sick, and that you treated me with miserable cruelty. . . . You think I have no feelings, and that I can do without one bit of love or kindness; but I cannot live so: and you have no pity.

In this passage from Chapter 4, Jane, the narrator, is addressing her aunt before leaving Gateshead. She is determined to leave behind the remnants of a family she has left, feeling as though she’s going to do better on her own.

While the first person is one of the most common literary perspectives, it is not the only one. The other most common is the third person, followed by the second person. As stated above, first-person perceptive occurs when the writer uses first-person pronouns like “I,” “my,” and “me.” The third-person narrative perspective includes a narrator who is at a variable distance from the action. They are, usually, not included in the action. The writer only uses third-person pronouns like “they,” “them,” “her,” and “him”. The second person narrative perceptive is most definitely the least commonly used. It occurs when the narrator is addressing a specific person or the audience in general. Second person pronouns like “you” and “yours” are used.